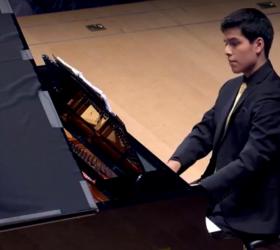 A Passion to Play: Giancarlo Llerena

Piano senior Giancarlo Llerena has lifted his hands, stood, turned towards the audience, and taken his final bow on presumably too many stages to count. From Colorado, to Boston, to Miami, to Dreyfoos’ own Meyer Hall, Llerena has played in concert halls big and small, and smiled out towards crowds of 100 and crowds of 100,000. Yet no matter the location, no matter the size, and no matter how bright the spotlight shining down on him may be, his passion for his art never wanes. Each performance, to Llerena, is uniquely its own, and he is motivated to learn and grow as a musician from every song he plays.

“[Piano] has been a passion of mine from the second I began lessons, and I honestly cannot see myself doing anything else,” Llerena said. “My experience with it has been so rewarding and I’ve met such wonderful people, traveled to such astonishing places, and I simply have enjoyed every step of the process."

Throughout his time at Dreyfoos, Llerena has worked hard to hone his expanding musical skillset. Summer programs such as the Boston University (BU) Tanglewood Institute (BUTI), a pre-college program of BU’s College of Fine Arts affiliated with the Boston Symphony Orchestra and Tanglewood Music Center which Llerena attended in 2017, have exposed him to higher-level musicians and challenged him to rise to their level. Yet his most memorable summer experience, he said, came from spending five weeks in Aspen attending a program the School of the Arts Foundation (SOAFI) was able to help send him to.

“I had the amazing fortune of studying with the head of Juilliard’s piano department [at the 2018 Aspen Music Festival], and she truly helped me become much more comfortable behind the piano,” Llerena said. “Also, being that the average age of a student there is 22, I was surrounded by musicians of such a high caliber, allowing me to recognize their abilities as a source of inspiration for my own growth. It was most definitely the best 5 weeks of my life.”

Additionally, Llerena has won scholarships through SOAFI, such as the Benenson Scholarship, awarded by SOAFI Board Member Gladys Benenson in memory of her husband, Edward Benenson, to students for college scholarship or summer institutes in support of their music studies. Monetary prizes acquired through competitions such as the Greater Miami Youth Symphony Concerto Competition, which also allowed Llerena to make his debut as a soloist performing with an orchestra, have helped pay the way for many of his summer expeditions.

“Especially within the past year, I have won several first place prizes in local and national piano competitions, such as the Steinway & Sons Jr. Piano Competition,” Llerena said. “I believe that my proudest achievement is being named a 2019 ‘Finalist’ of the National YoungArts Foundation in Classical Music. I had never even dreamed of becoming a finalist, so I am looking extremely forward to … the joy of being surrounded by people who share the same passion and interests as me. I have spent countless hours preparing for my audition recordings for this, and it is a great feeling to know that my hard work is beginning to pay off.”

The National YoungArts Foundation’s “signature program” encourages artists aged 15-18 to submit their work in various categories, such as cinematic arts, classical music, dance, visual arts, and more. According to the YoungArts website, YoungArts winners can receive awards of up to $10,000, and also have the opportunity to both work with renowned mentors in their field of expertise and showcase their work in unique exhibition areas they might not otherwise have access to. National YoungArts week, which took place from January 6-13, “consists of workshops, masterclasses, performances, [and] monetary awards,” said Llerena, who, as a winner, was invited to attend.

Always looking to increase his breadth as a musician, Llerena took yet another step last year to better his piano skills when he decided to pursue out-of-school lessons.

“Over a year ago, I reached out to one of Dreyfoos’ amazing artists in residence for private lessons, and the combination of the costly fee and the amount of gas it takes to drive to her house was overwhelming,” Llerena said. “Thankfully, the Foundation has been helping me afford these lessons, and I have to say that the outcome has been extremely fruitful.”

As one can imagine, keeping up with both piano and school can sometimes be challenging for Llerena. Though he has had to prioritize and multitask at times, he views the difficulty as a lesson, and recognizes that proper time management and maximum productivity are “traits that I will need for the rest of my life,” he said.

While what comes next for him is undecided, Llerena knows one thing is for sure: piano is and always will be in his future in some form. In pursuit of a career in classical music, Llerena applied to many music conservatories and colleges, and has already made it past the pre-screening round of auditions for the New England Conservatory, Peabody Institute, and Manhattan School of Music. He is currently waiting to learn whether he will advance to the next round of auditions for Juilliard.

“I really hope to end up studying in New York City. There are so many resources there and in my opinion, it’s the place to be for classical musicians,” Llerena said. “There is nothing more that I want than a career in piano.”

As his time at Dreyfoos comes to a close, Llerena has started to reflect on the almost complete four years he spent on campus. While he will always cherish moments with his closest friends on and off the stage, what he is most grateful for, he says, is the personal growth he underwent as a musician throughout high school.

“At the beginning of high school, although at a high enough level to have been accepted to Dreyfoos, I was still … in the early stages of my technical growth,” Llerena said. “I absolutely credit much of my maturity and confidence to Dreyfoos' music teachers and all of the resources that I have been offered here.”