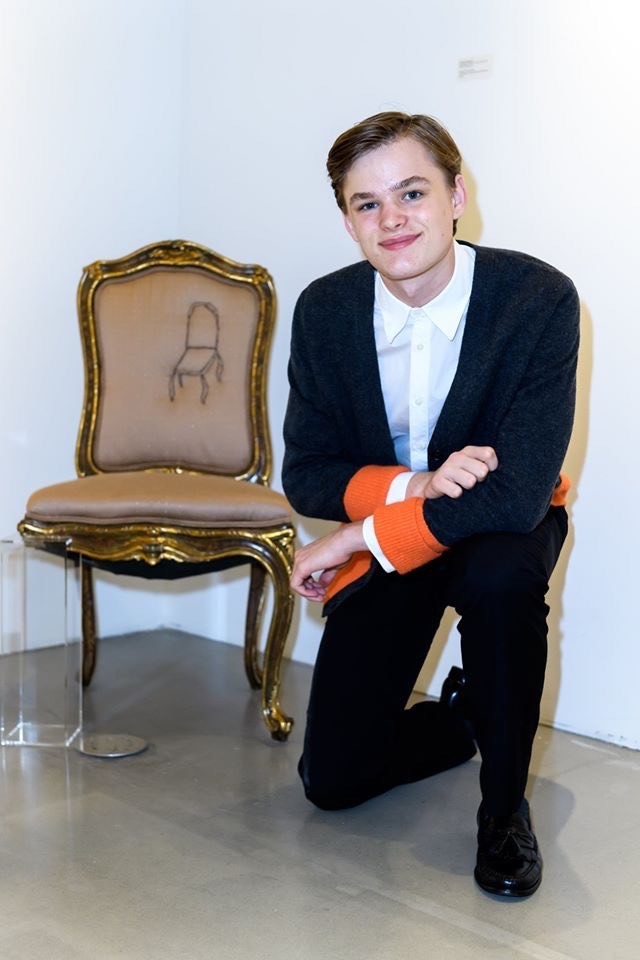 Born into an artistic family, dance senior Nicolas Ouporov was captivated by the artistic world around him from the start.

“The arts are what bring me personal fulfillment and meaning,” Ouporov said. “I can’t imagine my life without creating sculpture, setting up photo shoots, or choreographing dances. I think no matter what profession you take on; the spirit of creation is necessary and leads to a much more fulfilling life.”

Ouporov began to dance at eight years old, attending dance studios after school for about nine years following. He attended Bak Middle School of the Arts as a dance major, as one of the few male dancers in his art area. He continues to dance three to four times a week after school, at studios such as The Art of Classical Ballet in Pompano and Palm Beach Atlantic’s dance school.

“My favorite thing about dancing is the energy you can bring to every class and performance,” Ouporov said. “With dance, you have such a freedom to express yourself and that never fails to excite me.”

Though Ouporov’s parents were painters, it's his connection to dance that has spanned the majority of his life. His interest in visual arts, conversely, only began to take shape recently.

“I think I have always been interested in the visual arts but until recently lacked a formalized way to pursue it,” Ouporov said. “When I was young, I actually had an aversion to creating art, citing that I wanted to be completely different than my parents. It wasn’t until I discovered my father's old film cameras that I allowed myself to experiment with art, drawing my experience with dance and themes of masculinity into visual presentation.”

Ouporov found success in both visual arts and photography, awarded an Honorable Mention in photography by the National YoungArts Foundation in both 2018 and 2019, and becoming a finalist in visual arts at YoungArts Week of 2019.

“My first year at YoungArts was definitely a time of inspiration,” Ouporov said. “Seeing a whole group of people so motivated by the prospect of artistic creation and the perfection of a craft was equally energizing and humbling. It was then that I first came to identify with the term ‘artist’ which before I had felt estranged from.”

Attending YoungArts gave Ouporov the ability to expand his viewpoint of the arts. At YoungArts week, he was given the opportunity to attend masterclasses with artists such as Leticia Bajuyo, in which the students were able to create art utilizing old CDs, digging through archives of 2000s movies, and experimenting visually.

“What I truly value about the visual arts is that there are really no boundaries to what you create other than what you might insist on,” Ouporov said. “While in dance, you might be limited by experience or particular technique, in visual arts there is a different performative aspect. It’s one where the artwork becomes distinct from its creator as soon as it is presented. Then again, the differences between performance and visual arts are really arbitrary.”

He has taken his experience as a dancer and translated it to his photography, focusing on elements that tackle how he expresses his masculinity through the performance art, and countering the idea of dance as a feminine art form.

“Photography to me is just as dignified an art as any,” Ouporov said. “It is interesting to me because it captures a singular moment in time with precision, which imbues it with the expectation that faithfully depicts real life. Because of this, it acts as a nice tool to include personal and performative acts into my 2-D artwork.”

Aside from his artistic talents, Ouporov holds a strong interest in math’s and sciences, maintaining a rigorous course load his senior year, including his second year of both calculus and physics. He finds it easiest to balance his academic workload with his various extracurriculars by “isolating each task I might have and relegating them to a specific time.”

“[Maths and sciences] are in my opinion, artistic mediums of their own, albeit based on functionality over form,” Ouporov said. “I want to pursue physics because it has been something, I have always been devoutly interested in but never found easy, which I think is the optimum pairing. I am also particularly fond of the idea of building upon a collective understanding, working to contribute some added piece of information or question to what we have built on for many thousands of years.”

Leaving Dreyfoos, Ouporov will enter the freshman class at Columbia University in New York City, majoring in biophysics, with a minor in dance or visual arts. He plans to maintain his passion for the arts by continuing in dance and pursuing the university’s 3-2 program to graduate with both a bachelor of the arts and the sciences.

“Columbia was really the only college that had a stellar sciences program, location, and vibrant arts scene,” Ouporov said. “NYC is a cultural and technological epicenter which I hope to make full use of while I am there!”