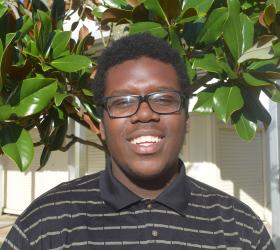 You may have seen Dreyfoos senior Allen Cadet on stage at Dreyfoos in White behind the keyboard, at the Kravis Center for a Prism Concert playing double bass, on the drums at the Impromptu Piano Recital, or maybe you heard him in the pit during the Theatre department’s production of “Kiss Me Kate.” Like many of our Dreyfoos students, that just scratches the surface of the extra work and dedication Allen has for his art area. Although his major is upright bass, he is self-taught on the keyboard, something he began playing when he was 7 years old. Bass became his passion a little later, while attending sixth grade at Palm Springs Community Middle School.

“I started playing bass at Palm Springs. I did not have a private teacher at the time nor did I have a double bass at home so for the most part it was just me practicing with a broomstick. I didn't really start playing bass because of a teacher, but Dr. Float at Palm Springs played a part in the process. I wish she could see me now and how far I've come within the past five or six years. I honestly started playing bass because I felt like it was more an instrument for me then the cello. When I pick the bass up and I start playing, it just feels like my instrument. It feels natural.”

Through Amy’s Light, a program at the School of the Arts Foundation funded by the Amy Winehouse Foundation, Allen has now been taking private lessons with an instructor for the past four years. “Dreyfoos offered me a private teacher and an environment where I can be artistically creative. Dreyfoos has also given me a professional atmosphere to work in.”

Some of that professional atmosphere is from the variety of performances Allen is involved in. For shows like “Kiss Me Kate,” Allen said that “We usually rehearse three days out of the week. Those rehearsals take about three to four hours depending on what we need to work on and then we also go to Dreyfoos on Sundays for sitzprobe [the first rehearsal where the orchestra and singers rehearse together]. And sitzprobe is usually about a good six to eight hours.”

For the Prism Concert, Allen’s favorite show he has participated in, the entire music department gains the experience of performing on stage at the Kravis Center, thanks to Sue and James Patterson.

This past summer, Allen gained experience in another field of music that he is interested in – production. He attended the Amp Academy of Music Production Summer Program, a six day camp with hands on experience from professionals. “The first couple of days we got to know each other and figured out what our interests were in terms of if we would prefer to DJ or produce. A lot of the kids that were there that wanted to DJ also had an interest in producing. My interest is in producing so I spent my time learning how to work on Ableton Live, Machine and other software. I also learned how to DJ on both digital and analog turntables - the proper way to spin a record like Funkmaster Flex. One of the things that our instructor, Travis (Class of 1999 Dreyfoos alum), stressed upon was that software didn't make music, it was the person and the creativity behind it. During that week Mr. Barfield also came by and that was one of the highlights of my summer.”

“Dreyfoos means the whole world to me because it's my Safe Haven and it's my home. I practically live at Dreyfoos. The only things I don't do are sleep over and take showers here. I have mothers and fathers within the Music Department that love me who are not biologically related to me. I'm grateful for my time at Dreyfoos and I'm going miss it dearly.”