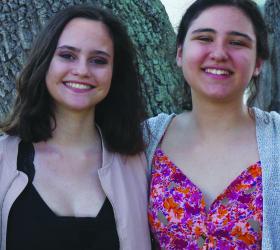 Every Hour is a Muse Hour

The making of The Muse, the Dreyfoos School of the Arts national award-winning newsmagazine, is not a process that stops while school is out. Newly appointed Editors-in-Chief, Marianna Kaimakliotis and Ruby Rosenthal, have already begun planning for the 2017-2018 magazine issues. Both juniors in the Communication Arts program, Marianna and Ruby have both wanted to be writers for as long as they can remember.
Ruby recalls writing as early as fourth grade, “I'd sit on the sidelines of the playground and write fantasies - my goal was to make a career of novel-writing. I wanted to be featured in the front of Barnes and Noble before I even knew what the New York Times bestseller list was. This was unusual, as both of my parents are college math professors, but I loved it just the same, reading everything I could get my hands on and writing my own stories.”
Marianna, who balances her time equally between her love of writing and film, began her work on The Muse as an Entertainment/Arts staffer her sophomore year, and then as co-Layout editor her junior year. Ruby, who hadn’t realized her interest in journalism and journalistic writing until attending Dreyfoos, spent half of this past year as the entertainment editor and the other half as the arts editor. As Marianna put it “Every hour is a Muse hour!” and as their new positions have already started with setting up interviews for new staffers. This summer, they will plan out the deadlines, pick fonts, photo styles, and design a new masthead.
In the coming year, Marianna and Ruby have big plans for the magazine. They plan to expand their digital presence, adding a multimedia editor and social media editor to their staff. Ruby stated that “These two positions can serve as a collaborative means between print editors and web editors, allowing stories that are seen in print to have multiple dimensions -- from photos on Instagram, stories on Snapchat, to videos on our website.” They are also hoping to put a lot of focus on creating longer stories, with more in-depth research.
In the past, Marianna has attended Northwestern’s Film Cherub Summer program, and will attend NYU Tisch summer film program this summer. When she is not busy with the Muse, she spends her time on other creative pursuits such as making films, drawing, graphic design, and playing guitar.
Ruby has attended Newsroom by the Bay, a multimedia journalism summer program held on the campus of Stanford University, and participated in Project Tikvah, where she and 15 other Jewish teens went to Charleston, South Carolina to help provide relief from a flood and to tackle social justice issues. She volunteers as a teacher aide at Hebrew school; is working to try to begin a tutoring program at the West Palm Beach library for local refugees called the Global Village Project; writing a children’s book; and is in the Jewish Student Union, National Honor Society, English Honor Society, Spanish Honor Society, and Communications Honor Society. Next year, she will be co-president of Model UN.
Both Ruby and Marianna have aspirations to join the United Nations, with their eyes set on attending Columbia University, although Ruby has also expressed interest in Georgetown. Ruby’s intent is to pursue a career in international relations, and her dream is to be the United States’ ambassador to Turkey. Marianna hopes to study global issues and solutions or creative writing, saying that “I hope to either become a creative writer, join the UN or become a film director, but I know that human interest is my focus and telling stories of importance is my goal.”
Although they are only now entering their senior year, Ruby and Marianna know that Dreyfoos has already made a huge impact on their future. Ruby professed “Dreyfoos is a school that fosters a culture unlike any other. Nowhere else can you go to school where the students sing and dance at graduation, are the arts as important as the academics, where you be courageous enough to speak your mind without fear of judgement. The students that are chosen are bright, brilliant, and extremely passionate about what they do, and there’s a reason why we go off to exemplary higher institutions when we graduate; the innate devotion and the drive the students possess here is unlike any other. To me, Dreyfoos is a second home, as cliche as it may be, and I am so grateful to be spending my high school years here.”
Check out more Student Spotlights, Alumni Spotlights or Donor Spotlights.