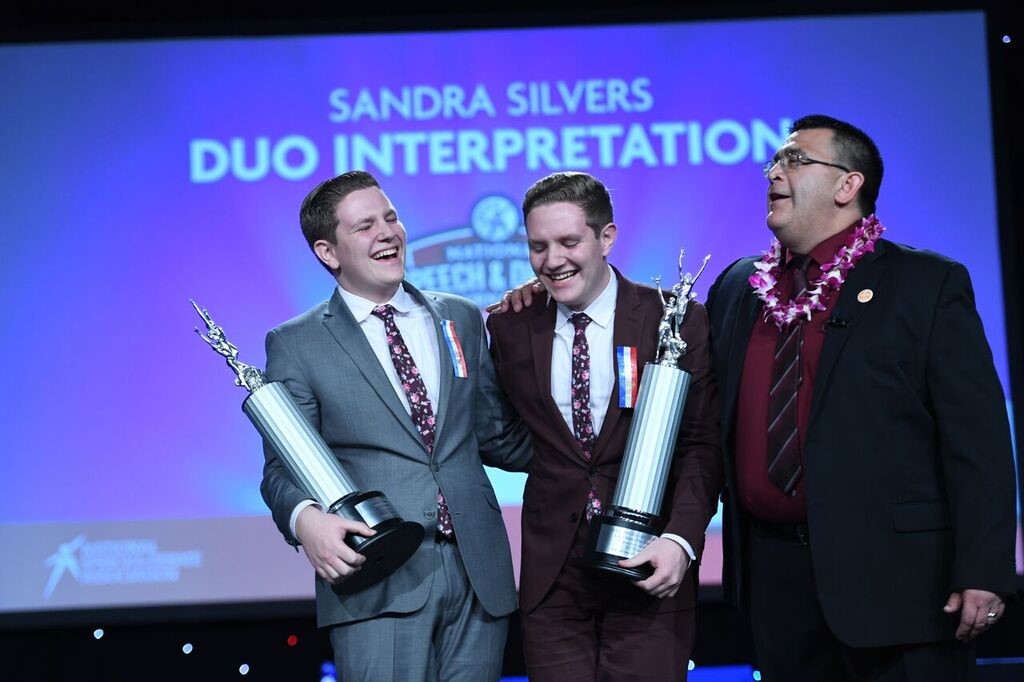 Communications senior Kevin Ahern has spent countless hours on the top floor of Building 1. As a freshman, he took notes from the seniors whose names were inscribed on trophies around the room. He attended every performance hour. He practiced and competed relentlessly. In describing Ahern’s high school experience and, specifically, his growth as a member of the Dreyfoos Speech and Debate Team, only one phrase seems fitting: Full circle.

“The most rewarding moment of my high school experience has not been a physical award...or a result at a tournament ... It's always been when I see people who I taught how to do speech and debate,” Ahern said. “Yesterday we had a performance hour, and I was able to watch one of my previous mentees...perform her pieces. I was so proud in that moment because these people have grown so much, and to be a part of that and leave that legacy at Dreyfoos is the most impactful thing.”

Throughout his childhood, Ahern participated in theatre, leading him to join the forensics community as a competitor in the local circuit upon entering middle school. His fascination with the arts stemmed from a young age, leading him to audition for Dreyfoos seeking a place to foster his interests and grow into them.

“In elementary school, when I was exposed to things like writing and journalism and acting and all types of stuff, I found myself really loving it,” Ahern said. “Dreyfoos provided an opportunity for me to really pursue the arts in a serious way throughout high school... at levels that no other high school would have allowed me to.”

Both in and outside of school, Ahern passionately devotes time to his art. Whether he’s teaching middle school students Speech and Debate basics for his job at the Communication Arts Academy, designing graphics for his internship with the School of the Arts Foundation or exercising his communication skills as Co-Vice President of the senior class, everything Ahern does “can be tied back to Communication Arts in some way, shape, or form,” as he put it.

Within Building 1, Ahern can be found on all three levels of the communications wing composing layouts, editing films, and leading Speech and Debate team meetings in his new role as co-president.

“I love all three aspects of communications that I pursue—speech and debate, yearbook, and film,” Ahern said. “I think that at Dreyfoos, I've definitely found myself more passionate about speech and debate, because [it] is an activity that also leaves Dreyfoos, so I find that it's really awesome that the work that we do...reaches people across the nation.”

Even before switching his major from digital media to communications in the second half of his freshman year, Ahern found his place on Dreyfoos’ speech and debate team. As a student in Debate I, he and his twin brother Kyle Ahern began competing as a team in Duo Interpretation and took their rendition of the well-known movie ‘Rainman’ from the local circuit to state and national competitions. Before the twins ever championed their first major tournament—the 2016 Bulldog Invitational at G. Holmes Braddock High School—Ahern recalls feeling hooked.

“I truly believe that speech and debate has a place for everybody,” he said. “There are all different types of events, and there's an event that everyone can excel in. [It’s] a really awesome way for anybody to share their voice and talk about what matters to them.”

Ahern first attended a National Speech and Debate Association (NSDA) National Tournament in the summer of 2015 as a seventh-grader, making the 2019 NSDA Nationals in Dallas, Texas his fifth year competing as a speaker. After four straight years of never advancing past the first round, Ahern and his brother placed first in Duo Interpretation, performing the piece ‘Donnie Darko.’ In order to get to the national stage, the brothers broke through 13 rounds, with the competition pool shrinking after each until only 6 pairs were left to perform in front of a live audience.

“Since I was in sixth grade and I watched my very first forensics piece, it was always my dream to be like that and make people feel the way that I felt when I watched that [NSDA finals round] performance,” Ahern said.

While the accolades that came with performing at Nationals gratify him, Ahern finds that the support system he has found through speech and debate and the message he gets to spread are what is most valuable to him.

“Every time we would advance, or during our performance, they [the Dreyfoos speech and debate team] were so supportive, and their praise meant more than any of the physical awards we earned, as well as sharing the message about the stigmatization a mental illness in the world, and the responses we got from the audience,” Ahern said. “That was more powerful than any of the awards.”

Ahern attended several summer programs across the nation to hone his skills as a speaker. From the Champions Briefs Institute, in Davie, Florida at Nova Southeastern University to the George Mason Institute of Forensics at George Mason University in Fairfax, Virginia and the University of Texas at Austin’s National Institute of Forensics, he frequently spends his summer traveling in preparation for the next competition season.

“Speech and debate camp literally changed my life; I cannot stress that enough,” Ahern said. “My first time at camp...my brain literally expanded in so many ways, not only about speech and debate, but about... all different types of really important societal issues, and the people I met were so awesome.”

In his four years at Dreyfoos, speech and debate have taken Ahern across the country both over the summer and throughout the year, allowing him to learn through experience. Yet no place, he says, is quite like home, and where Ahern feels he’s absorbed the most is within Dreyfoos’ halls.

“I’ve had the privilege of pursuing things I genuinely love, and the most impactful thing about the Dreyfoos education experience, which you can't get anywhere else, is... the other students that I get to work with every day—[they] are the real...lights, I feel like, of this school,” Ahern said. “I’ve learned from them so much and working with my peers and being able to admire the work that other majors do... has been so important and has made an indelible impact on my life.”

From each of his extracurriculars, Ahern will carry with him life lessons wherever his future, though now uncertain, may take him. Speech and debate specifically, he says, has left him well-equipped to pursue communication arts—his ultimate, broad-based goal.

“Speech and debate is so much about speaking your mind, but it's equally about listening to other people, and the speech and debate community at large has taught me that listening is one of the most valuable tools in communications that we often overlook,” Ahern said. “I've learned about so many important issues...and it's made me a better performer and a better person.”