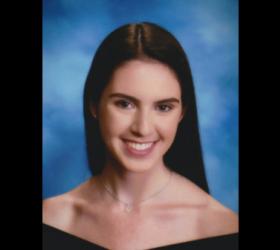 All the Right Cues

Dreyfoos Technical Theatre senior Sidney Rubinowicz began her journey in the theatre world at just six years old. Sidney said, “When I was six years old I began musical theatre. I was so shy as a child that my parents thought the best way to develop my confidence would be to put me onstage. I instantly loved it. Growing up, I was always participating in shows and summer theatre camps. My mom loves to say that theatre allowed me to break out of my shell and show who I really am.”

The musical, Annie, also had a huge impact on Sidney’s love for theatre. She said, I always had the VHS tape, and eventually DVD, playing at home, with the volume turned all the way up. I would dance around the house in a tutu and sing every word to “Let’s Go to the Movies” and “Tomorrow.” My parents nourished this love of theatre by always taking me to see plays and musicals, beginning with Children’s Theatre. When I was eight years old, my parents took me to my first Broadway show. I practically cried when they handed me the tickets, and said we were going to see Annie.”

Her passion for theatre didn’t end there.“In the seventh grade, my stagecraft teacher planned a lesson on the different technical roles of a production. Each group of students was designed to try the roles sound designer, lighting designer, and stage manager. I had never heard of a stage manager before, yet instantly fell in love with the position. After the project ended I told myself I had to stage manage again.”

Sidney did exactly that. She became the stage manager of her eighth grade musical, The Boyfriend. After conquering her eighth grade performance, Sidney said, “My dream became to stage manage a mainstage musical at Dreyfoos, then to get into college for management. My dream has only continued to grow since then, but I do believe I had an instinct that very day in seventh grade when technical theatre was still a kind of foreign concept to me.

Sidney is thankful for her middle school theatre teachers, Mr. Pinkney (costume) and Mr. Steadman (stagecraft), who first introduced her to theatre. “They lit the fire, while my high school teachers kept it alive. Mr. Blanchette has challenged me every day to be stronger, smarter, and more creative throughout every class and production. Through his design classes, he has shown me that I am more than a stage manager, I am also a designer. Ms. Petrucci, the current Dean of Theatre, gave me my first management opportunity at Dreyfoos. She has continued to support me throughout high school, and my college application process. She served as my mentor, and continues to encourage me to dream bigger.”

Sidney has been the stage manager for two mainstage musicals at Dreyfoos, (The Addams Family and Kiss Me Kate), as well as over 5 black box showcases (Theatre Collective, Semester Showcases, etc.). She has also been the assistant stage manager for Thoroughly Modern Millie and Shrek the Musical, production manager for Romeo and Juliet, participated in two Prop Run Crews (The Diary of Anne Frank and Moon Over Buffalo), and a Paint Crew (The Caucasian Chalk Circle). Sidney said, “My favorite production was The Addams Family because there were multiple challenging special effects that made it so exciting. Some examples include the exploding bird, Fester’s face on the moon, and Wednesday’s shooting arrow. This was also the first mainstage musical I stage managed at Dreyfoos, a role I had been working to earn since my freshman year.”

Show day is the busiest, but also most exciting day for Sidney. “The team’s pre-show duties begin about two hours before curtain (the start of the show). The Management Team begins by sweeping the space of any hazardous materials to ensure the safety of the actors. The Props Crew ensures all their props are laid out on the prop table, or another designated location. The Deck Crew presets the set pieces for the opening look of the show. The Sound Crew mics all the actors and completes sound checks. The Light Crew turns on haze and completes Dark Checks (ensuring all necessary lights have been turned off). The teams also test any special effects that are present in the show. As the stage manager, I ensure everyone is completing their designated tasks, so the show can run smoothly.” Sidney explained.

However, there is so much more that goes into putting on a show than just what happens on show day. Sidney said, “The process of mounting a production begins with the design phase. The director and designers brainstorm ideas for the set, costumes, and other technical elements. As the stage manager, I would participate in these meetings, as well as meet individually with the director. We would plan the rehearsal schedule while taking into account the conflicts of the actors. For every show, I create original paperwork with a consistent logo, so all my rehearsal reports are clear, concise, and recognizable. Then I organize the audition and casting process with the director. Once rehearsals begin, I work closely with the director to stay on track with blocking and choreographing (if a musical). Finally, tech week is when we combine the performance and the technical aspect. This is the point when the stage manager is officially in charge. It is the most stressful, but most exciting point of a production because I begin calling the show (call the sound, light, deck, and rail cues). This week culminates with the preview, and ultimately, opening night. For our most recent musical Kiss Me Kate, the production team earned an average of 250 lab hours, which only includes time spent at school.”

Sidney is proud to say she will be attending Carnegie Mellon University in Pittsburgh, Pennsylvania. This fall, she will be in the Drama Department in the College of Fine Arts, studying Design and Production. Sidney said, “This program provides a foundation of technical theatre for one year before narrowing the focus. It is conservatory-style, meaning that I take almost exclusively arts courses. I plan to declare an emphasis in Stage and Production Management.”

Sidney has already gotten a feel for what college life will be like at Carnegie Mellon University. She attended Carnegie’s Pre-College program last summer for six weeks. “I had the opportunity to live in a dorm and experience a college campus while learning about technical theatre. I had classes 9am-5pm on Monday through Friday, which included Stagecraft, Drafting, Basic Design, Stage and Production Management, and Technical Direction. I also had the chance to experience Pittsburgh and meet students from across the country who love theatre as much as I do. This program confirmed that I wanted to attend a conservatory program in college.”

Dreyfoos has offered Sidney a community of individuals who are incredibly supportive and share her love for the arts. “Being surrounded by so many talented students inspires me every day to continue improving in my craft. I have found that my teachers truly want me to succeed and will do anything to help me do so. Dreyfoos also has the theatre facilities that make intricate scenery and stunning costumes possible. Not many high schools have the array of tools in the scene shop, and resources in the theatre. This has allowed me to participate in technically advanced productions that are both challenging and stimulating.”

When asked what Dreyfoos means to her, Sidney replied, “Dreyfoos is so much more than a school. It is a studio, it is a theatre, it is a home. My parents love to say that I spend more time at school than at home. After earning over 2,000 theatre lab hours, I may have to agree with them. Nonetheless, I do not believe that any of those hours were wasted. Dreyfoos is a safe space for me to express myself, to learn, to grow. Dreyfoos means working hard and putting the hours in beyond the final bell simply because we feel the innate desire to. Because we are artists. Because we wouldn’t fathom otherwise. Dreyfoos means everything to me. It is the reason I am the student, artist, and person who I am.”