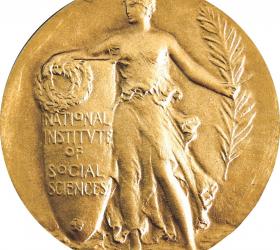 NISS: Funding the "Next Step" for Dreyfoos Students

Joe Flanagan is one of the members of the Board of the Florida Chapter of the National Institute of Social Sciences (NISS), and a founder of a NISS Dreyfoos Scholarship program, which has supported various students across Palm Beach County in moving forward with their academic and artistic successes. Flanagan participated in the program’s inception and has helped carry it forward in the six years since.

“The program was conceived and initiated by the Members of the Board of the Florida Chapter to included James Ballentine Jr., Stewart Clifford, William Told and myself,” Flanagan said. “All four of us come from successful and varied business backgrounds that include manufacturing, banking, and advertising.”

The NISS is an association made up of dues-paying citizens across the nation, who are advocates for the social sciences. The association endorses social science research and recognizes individuals who have contributed to the community and provided valuable insight on welfare with a Gold Honor Medal. Members consist of business professionals, philanthropists, academics, and other worldly citizens seeking knowledge on the subject.

“We encourage the study of the social sciences via direct and indirect support of social science research and by sponsoring public discussion of pressing social challenges such as the effects of technology, artificial intelligence, climate change, political polarization, income distribution, demographics, and the future of humanity,” Flanagan said.

As a board member of the Florida Chapter of the NISS, Flanagan has participated in various of the forums that the NISS has hosted each spring for the past 28 years. This year’s annual luncheon featured speaker will be Elliot Bostwick Davis, the new President and CEO of the Norton Museum in West Palm Beach.

“As a free standing chapter of the national organization, the NISS’ focus is to bring together individuals of diverse backgrounds and achievements for the purpose of understanding issues that affect the lives of its members and friends,” Flanagan said.

The NISS started the program by asking Dreyfoos to undertake a pilot program six years ago, which funds a student for at least one year at a top college or university. The program is funded by the Members and Friends each spring.

“Working with Dreyfoos, we established rigorous standards that must be met in order to continue the scholarship for the balance of their collegiate career,” Flanagan said. “To date, the students that have been involved in the program have all completed the requirements in an exemplary fashion. A common thread is our shared passion for the arts, which was a driving force in our selection of Dreyfoos as the institution which we felt best mirrored our strategic objectives.”

The NISS/Dreyfoos Scholarship Program has funded the four year education of one student at the Berkeley College of Music in Boston, and one at The America Musical and Dramatic Academy (AMDA) in Los Angeles, California. Currently, the program is providing scholarships to Dreyfoos graduates at University of Florida, Juilliard, NYU Tisch, Oberlin, and Yale. Funding is set in place to continue the program this year.

“NISS is proud of its support of college bound students who demonstrate academic excellence, are in financial need and are committed to using their college studies as an important step in their career...wherever it takes them,” Flanagan said.