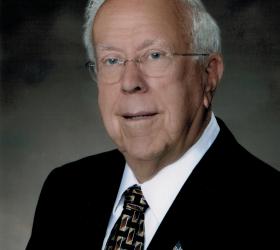 The Business of Giving Back

He’s been described in the Palm Beach Post as “one of the titans of South Florida’s business community.” He’s the recipient of the Chamber of Commerce’s prestigious Community Award, among others. He’s a member of “at least a dozen boards,” and the founder of a multi-million-dollar business. Some might say that School of the Arts Foundation Board Treasurer and Finances Committee Chair George Elmore truly does it all.

Now an active philanthropist and successful businessman, Elmore came from humble beginnings. After serving in the U.S. Army during the Korean War, he returned to Florida, where he moved from Pennsylvania, and immediately founded his company alongside his late wife. Since the company paved its first driveway in Delray Beach many years ago, Hardrives Paving has certainly expanded and is now one of the largest heavy construction companies in Palm Beach. Over the years, Mr. Elmore has given back to the community not only through philanthropy, but also through the construction of many of the public works sites people utilize everyday.

“Hardrives Paving began as an asphalt company paving residential driveways,” Mr. Elmore said. “Through the years, it grew into a heavy equipment paving company doing many of the highways and developments you see today.”

It’s clear Mr. Elmore is, as a person, extremely dedicated to both his work and commitments outside of his professional life—he founded his company in 1957, and has been a member of the Foundation’s Board of Directors since its inception over 26 years ago.

Having been involved with the School of the Arts Foundation since the beginning, Mr. Elmore said, “[I have] used my sphere of influence to help develop it, serving on the Board and offering my business expertise and my financial support.”

As Treasurer of the Board and Chair of the Finance Committee, Mr. Elmore is responsible for “reviewing the budgets and expenses, [and] giving advice on financial decisions that have to be made.” Additionally, he acts as a “second signature” for payments over a certain threshold.

Outside of the School of the Arts Foundation, Mr. Elmore is extremely involved in his community. As a member of various boards for different organizations, he once told the Palm Beach Post that he believes in giving back to the community because the community was “good to him.”

“[I am involved with] some businesses like Bethesda Health and WPTV Public Television, some non-profits like United Way and 211 Crisis Line, and some organizations for the good of the community regarding youth, education, and the arts,” Mr. Elmore said.

While both his philanthropic service and business accomplishments have been recognized on multiple occasions, Mr. Elmore was most recently honored at Palm Beach Atlantic University’s (PBA) “American Free Enterprise Day.” This event acknowledges “individuals whose hard work and achievement exemplify the best of the American free enterprise system,” according to the PBA website.

“I am a good example of a person who deeply believes in free enterprise,” Mr. Elmore said in regards to accepting his award. “I have always been my own boss and made my own way. I believe in the freedom of Americans to do so. I also believe in giving back to the community, which is a good part of the free enterprise system.”

Despite all of his other commitments and duties, Mr. Elmore continually supported both the Dreyfoos School of the Arts and the Foundation in all of their joint endeavors over the years. Originally inspired by performances at the Kravis Center to join an organization that “educates students in the art,” Mr. Elmore believes wholeheartedly in the ability of students to make a career out of their artistic passions.

“Seeing the students, the talent [Dreyfoos and the Foundation] produce, and the impact of our [Dreyfoos] alumni spread across the country makes it worth the time and effort to help it [the School of the Arts Foundation] continue,” Mr. Elmore said.