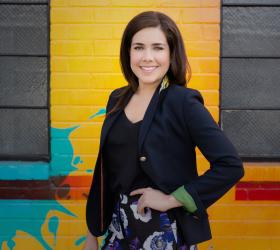 Class of 2003 alumna Victoria (Palace) Venturi may have left Dreyfoos behind years ago, but the skills she honed on campus as a communications major never left her. As the founder of her very own witty greeting card and lifestyle goods company, Paper Epiphanies, Venturi finds herself writing creatively every day in the workplace, just as she did as a high school student within Dreyfoos’ walls. Grounded in principles of women’s empowerment, Paper Epiphanies has expanded since its inception in 2013, and now supplies products to over 900 stores worldwide— a far cry from its humble beginnings in a one-bedroom studio. The growth in business, however, has not deterred Venturi from continuing to write almost 80 percent of the content featured on Paper Epiphanies’ cards, mugs, notebooks, and various other products. Check out all of Paper Epiphanies’ products and find more information here!

Q: What year did you graduate Dreyfoos, and what did you major in while attending?

Q: Did you also attend Bak Middle School of the Arts?

A: “I did not attend Bak Middle [School of the Arts.] I went to a small private school in Jupiter. Dreyfoos was a welcomed change and helped me develop a diverse and holistic worldview.”

Q: What was your experience attending high school at Dreyfoos like, in general?

A: “Dreyfoos was truly a unique opportunity. I was consistently engaged, challenged and excited about what I was learning. I loved that the arts were woven into everything we learned. It was almost like receiving a college level liberal arts education but in high school. Even in my mid 30s, I still remember and appreciate many of the courses I took at Dreyfoos.”

Q: While at Dreyfoos, who were your favorite teachers and why?

A: “That’s tough—I had so many wonderful teachers. Off the top of my head, I would say Ms. Weber [Mrs. Anyzeski], my Speech and Debate teacher. She was always enthusiastic, creative and taught with a sense of humor. She related to her students on an uncanny level. Mrs. Hubbard—my Guidance Counselor. Mrs. Hubbard had a beautiful empathy that is rare these days. She had an ability to make you feel truly heard and as a teenager, that was special. Finally, Ms. Marshall who taught me AP Psychology and History. Some students found her to be a ‘hard teacher’ but that is what I loved most about her. She was wicked smart, expected the best of her students and was an incredible teacher.”

Q: What was your most memorable experience at Dreyfoos?

A: “That’s a hard one. I think Spirit Week was always a favorite memory. One year, a friend of mine, Scott Maxson and I went as Adam and Eve. It was pretty epic.”

Q: What was the most important lesson attending Dreyfoos taught you?

A: “That the world is diverse and colorful. That everyone has a gift to offer and often, that gift can become a career. And finally, that the world will always be stronger and more beautiful with art in it.”

Q: Do you think that attending Dreyfoos played a role in your choice of career path?

A: “I do. I would now consider myself a writer by trade. It is what I do most days and I still produce 80 percent of all the content for Paper Epiphanies. Being a Communications major at Dreyfoos, I was always immersed in exercises to strengthen and hone that skill. From creative writing to speech and debate, I was always flexing that muscle. I was also published for the first time in high school—a poem in a national literary magazine. That accomplishment has always stuck with me and helped boost my confidence as developed in my career. Through Paper Epiphanies, I have also had the opportunity to collaborate with many other Dreyfoos Alumni, including Lillian Farag, Whitney Blount Arrington, Sarah Yansura Cooke and more.”

Q: Where did you attend college and what did you study?

A: “I went to Rollins College in Winter Park, Florida. I was a double major in Political Science and Theatre Arts.”

Q: Tell me a little bit about Paper Epiphanies.

A: “Paper Epiphanies is a greeting Card and lifestyle goods company. We aim to bring authenticity back to greeting cards. To empower women to say what they want to want to say and not feel confined by the rules society makes for them. We tell the stories that are hard to tell. And the stories that are funny and sometimes a bit edgy. We create cards that represent all types of relationships – not just the traditional ones like marriage and Valentine’s day. We also have an office line called “Kiss My Pumps” specifically for women in business. A portion of proceeds are donated to Girl Up, a campaign of the United Nations Foundation. We also donate to other charities that support women including The Junior League and Planned Parenthood.”

Q: When did you come up with the idea to start Paper Epiphanies and what steps did you have to take to get the business up and running?

A: “I moved to Los Angeles in 2007 and was acting and dabbling in stand-up comedy. I eventually became a publicist, but had loads of creative writing and content that was not being used. Writing was and is my passion. In 2013, I lost my father to Leukemia in just 60 days, and thought, ‘f*ck it—I want to do something special with my short life.’ Six months later, Paper Epiphanies was born. Getting the company up and running required a lot of time and creative effort. I was still working fulltime as a publicist when I started Paper Epiphanies and spent all of my lunch breaks, evenings and weekends turning my idea into a functioning business. In 2015, we did the National Stationery Show for the first time and that really changed our business. In October of 2015, I was able to make Paper Epiphanies a fulltime job.”

Q: How has Paper Epiphanies grown and changed since the year it was founded?

A: “The short answer is—it has changed a lot. We have grown exponentially since our inception four and half years ago. We started with 24 cards in a dining roof of a one-bedroom studio in Santa Monica, California. We now have over 300 SKUs in our line and are in over 900 stores worldwide including Paper Source, Urban Outfitters, Harrods, and hundreds of others. We have moved our headquarters to Portland, Oregon and now have 6 employees. We were recently featured on ABC and in Forbes. We have won two Louie Awards, which are like the Oscars of greeting cards.”

Q: What is the biggest challenge you’ve faced thus far and what is your biggest accomplishment

A: “For us, the biggest challenge remains scaling. At each level of growth, our business changes drastically and we are forced to do things we have never done. Just when I feel that I have a handle on operations, we grow again and it all changes. That being said, I have never learned more or been more creatively fulfilled. Our biggest accomplishment to date would have to be ‘The 4th Trimester’ collection. We launched the collection in 2018, specifically for NEW moms. This is particularly meaningful to me as a mom of a 16-month-old. After having my daughter, I realized what a lack of cards existed to encapsulate what it felt like to be a new mother. These cards are a reflection of that experience. This collection has inspired our company to continue to tell stories that are not told enough or not told truthfully.”

Q: Describe Dreyfoos in one word.

A: “I think one’s appreciation of high school often comes many years later. When you have a chance to look back and remember your youth. The older I get, the more I appreciate the unique haven of learning and creativity that exists at Dreyfoos. It is one that will always have a special place in my heart.”