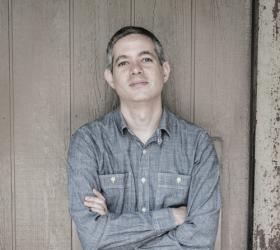 Class of 1996 alumni Daniel Browne has created a career out of his lifetime interest in writing. Now the author of works that have been published in various publications, including Salon, The Oxford American, The Believer, Mojo, and 40 Stories: New Writing from Harper Perennial, Browne has recently written the novel, In The Weeds. The novel was published in December of 2018 and can currently be found in various independent bookstores as well as on Amazon.

Browne attended Dreyfoos under its previous name, School of the Arts (SOA) as a communications major and went on to major in English at Columbia University. Browne lived in New York City for about twenty years before moving to Birmingham, Alabama where he now resides with his family.

Q: What year did you graduate from Dreyfoos?

Q:What major were you as a Dreyfoos student?

Q: What college did you attend and what did you major in?

Q: Who were your favorite teachers in your time at Dreyfoos?

A: I was lucky to have two exceptional writing teachers: Meg Medina (who has gone on to become a star of children’s and young adult literature) and Keith Young. I also owe a lot to Ancil Deluz, who was the dean of the communications department and taught a film appreciation class I got a lot out of. On the academic side, Theresa Beermann gave me a lot of freedom to read and think broadly. And Mr. Farina was a great history teacher and a great character.

Q: What inspired you to become a writer?

A: Hmmm…I’m not sure. I’ve been writing since before I got to SOA. My parents are both very funny and have a way with words. I’ve always been an avid reader. I think writing is an attractive pursuit for a kid who’s both socially awkward and has delusions of grandeur.

Q: How did you become inspired for your novel?

A: I tend to let an idea roll around in my head for a long time—sometimes years—before I get around to writing it. In the case of my novel In the Weeds, my wife Lisa was pregnant, and that lit a fire under me. I thought, “I better get this done now before my life changes completely and I don’t have the time.” I’m not sure if that counts as inspiration, but it was certainly motivation.

Q: What is your favorite part of the writing process?

A: To be honest, I enjoy having written something—that sense of accomplishment—more than writing itself. Writing is hard for me a lot of the time. Having said that, there’s nothing like coming up with a turn of phrase that’s snappy and original. Martin Amis calls writing “the War Against Cliché.”

Q: What does In the Weeds mean to you?

A: In the Weeds is about a guy who tries to start a farm in a neglected part of Brooklyn and makes a mess of everything. The title is a play on words. It refers to the actual farming and to the feeling of being overwhelmed by problems. It’s an expression restaurant workers use a lot, and there’s a restaurant that plays a big part in the story. What I wanted to do with the book is capture a time and place—really, a whole ecosystem of interactions between different kinds of people and institutions—in New York City, where I lived for nearly twenty years.

Q: What other types of writing do you enjoy outside of fiction?
A: I write (and read) poetry and essays. The essays are mostly, but not exclusively, about music. Anyone who’s interested can find links here.

Q: Who is your biggest muse?

A: I don’t know that there’s any one person I think of as a muse, but I love listening to how people talk and figuring out ways to use that in my writing. I have a whole notebook full of things I’ve overheard at the gym.

Q: What is your favorite part of being an author?

A: The best part is connecting with other people, whether it’s friends and acquaintances I haven’t heard from in a while or strangers who take the time to get in touch. I recently got to do a reading at the Book Cellar in Lake Worth, and it meant a lot to see so many faces, new and familiar.

Q: What other alumni have you collaborated with since your time at Dreyfoos?

A: Well, my wife Lisa Cericola is a Dreyfoos alum. We’ve been busy collaborating on our son Theo and our life together. She’s also the first reader of just about everything I write. One of my best friends is the artist Vanessa Davis. So far, we’ve never gotten the chance to do something creative together, but she did give my book a lovely blurb. My buddy Jordan Bachrad and I tried to write a TV script together once, but I couldn’t hang.

Q: How would you say Dreyfoos has changed your life?

A: SOA (it wasn’t called Dreyfoos till after I left) changed my life immeasurably. I was an inhibited kid before I got there. I wanted to express myself, but I didn’t know how. When I tried, I often got picked on. What I needed was to be around other weirdos. Through them, I figured out who I was and wanted to be. I think I might be a more cynical, closed-off person today if I’d had to go through the typical high school experience of jocks-v.-nerds and all that other B.S.

Q: What was your most memorable experience while you were at Dreyfoos?

A: That’s a hard one. I have many extremely vivid memories of my time there. I was the president of something called the Imagination Club. Silly name but a pretty good idea, which was to give students, who had to devote a lot of their time at school to practice and exercises, an opportunity for free artistic expression. In retrospect, I wish we’d been a bit more inclusive of different voices, but anyway, our performances—masterminded by my friend Sam Welsh—were always memorable. Sam and I wrote a French chanson called “Les Poissons Son Les Coquins de La Mer” (“The Fish are the Rogues of the Sea”) that I got to see performed by Caroline Crawford and Stephanie Kebabe, who sang like sirens. I was always a little jealous of the musicians, so that was a high point. But the more I think about it, what SOA will always be to me is lunch with my friends, same corner of the hallway every day.

Q: What advice would you give to students currently attending Dreyfoos?

A: It’s hard to plan for a life in the arts. I’d say the important thing is always be open to opportunities, whether they’re in the creative field you’ve chosen or not. And whatever art form you practice, you’ve got to want to do it for its own sake. Trying to make art for fame or fortune is a recipe for unhappiness. That’s probably true even if you’re rich and famous, but I wouldn’t know!