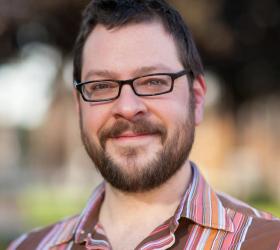 Q: What do you feel has been the highlight of your career so far?
A: It's pretty amazing to be fairly certain, when meeting someone new, that they've used something you created and having been an early part of Youtube at Google means that's a daily occurrance. However, the fact that I now get to work every day with a small, incredibly talented, and dedicated team of genuine friends is even more amazing. The level of creative autonomy I'm now afforded is a priceless thing.
Q: Have you had the opportunity to work with any other Dreyfoos (SOA) alums?
A: Not to any great extent. Nelson Downend (Class of '94) and I are constantly threatening each other with musical collaboration, but I have yet to run across another SOA alum in a professional context. I think a lot of it is proximity: everyone else seems to have ended up in NYC or LA!
Q: What recommendations do you have for our current DSOA students?
A: Make things. Make bad things. Figure out why they're bad, and then make better things. Make some of those things noises, and make some of them things you can look at, and maybe even some you can touch. Figure out which parts of those things make you happiest to make. Make more of those. Also, take Spanish with Mrs. Smith.
Q: In a brief statement can you explain “What Dreyfoos means to me”?
A: One of the differentiating factors in the arts components of my early education vs the more academic was that while the academic subjects were taught often isolated from any application, the arts education was always presented with the admonishment that it was useless unless you actually produced something with it. So much of my personal happiness comes from making things, I'm grateful to have been educated in an environment where the act of deliberate creation was the expectation.
Check out more Student Spotlights, Alumni Spotlights or Donor Spotlights.